WASHINGTON (AP) — The Justice Department is opening a sweeping investigation into policing practices in Minneapolis after a former officer was convicted in the killing of George Floyd there, Attorney General Merrick Garland announced Wednesday.

The decision comes a day after the former officer, Derek Chauvin, was found guilty of murder and manslaughter in Floyd’s death last May, a verdict that set off a wave of relief across the country. Floyd’s death had led to months of mass protests against policing and the treatment of Black people in the United States.

The Justice Department was already investigating whether Chauvin and the other officers involved in Floyd’s death violated his civil rights.

The new investigation is known as a “pattern or practice” — examining whether there is a pattern or practice of unconstitutional or unlawful policing — and will be a more sweeping review of the entire police department. It may result in major changes to policing in the Minnesota city.

It will examine the use of force by police officers, including force used during protests, and whether the department engages in discriminatory practices. It will also look into the department’s handling of misconduct allegations and its treatment of people with behavioral health issues and will assess the department’s current systems of accountability, Garland said.

The Minneapolis police said in a statement that the chief, Medaria Arradondo “welcomes this investigation” and will fully cooperate with federal prosecutors. Arradondo “understand that the intent of this inquiry is to reveal any deficiencies or unwanted conduct within the department and provide adequate resources and direction to correct them,” the statement said.

A senior Justice Department official said prosecutors chose to announce the investigation a day after the verdict because they did not want to do anything to interfere with Chauvin’s trial. The official would not discuss details of the investigation publicly and spoke on condition of anonymity.

Three other ex-Minneapolis police officers charged in Floyd’s death will be tried together beginning Aug. 23. The official said their trial is far enough off that officials believed it was still appropriate to make the announcement Wednesday, even though the defendants are awaiting trial on state charges.

It’s unclear whether the years under investigation will begin when Floyd died or before. Garland said a public report would be issued if the department finds a pattern or practice of unconstitutional policing. The government also could bring a lawsuit against the police department, which in the past have typically ended in settlement agreements or consent decrees to force changes.

The Minneapolis Police Department is also being investigated by the Minnesota Department of Human Rights, which is looking into the police department’s policies and practices over the past decade to see if it engaged in systemic discriminatory practices.

Minneapolis Mayor Jacob Frey said city officials “welcome the investigation as an opportunity to continue working toward deep change and accountability in the Minneapolis Police Department.” The city council also issued a statement supporting the investigation, saying its work had been constrained by local laws and that it welcomes “new tools to pursue transformational, structural changes to how the City provides for public safety.” 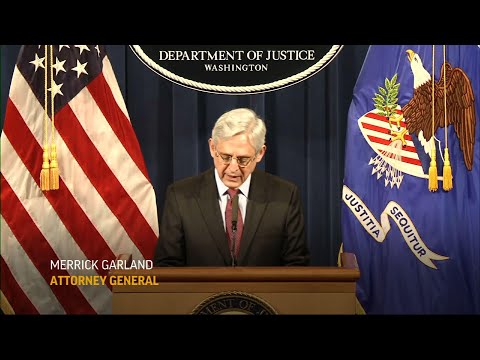 The Justice Department official said attorneys from the department’s civil rights division are in Minneapolis, working with the U.S. attorney’s office and speaking with community groups and others.

Floyd, 46, was arrested on suspicion of passing a counterfeit $20 bill for a pack of cigarettes at a corner market. He panicked, pleaded that he was claustrophobic and struggled with police when they tried to put him in a squad car. They put him on the ground instead.

The centerpiece of the case was bystander video of Floyd, handcuffed behind his back, gasping repeatedly, “I can’t breathe,” and onlookers yelling at Chauvin to stop as the officer pressed his knee on or close to Floyd’s neck for what authorities say was about 9 1/2 minutes, including several minutes after Floyd’s breathing had stopped and he had no pulse.

Floyd’s death May 25 became a flashpoint in the national conversation about the deaths of Black Americans at the hands of law enforcement and sparked worldwide protests.

At trial, Chauvin’s defense attorney persistently suggested Chauvin’s knee wasn’t on Floyd’s neck for as long as prosecutors argued, suggesting instead it was across Floyd’s back, shoulder blades and arm.

The Justice Department had previously considered opening a pattern or practice investigation into the police department soon after Floyd’s death, but then-Attorney General Bill Barr was hesitant to do so at the time, fearing that it could cause further divisions in law enforcement amid widespread protests and civil unrest, three people familiar with the matter told the AP.

Garland said the challenges being faced “are deeply woven into our history.”

“They did not arise today or last year,” Garland said. “Building trust between community and law enforcement will take time and effort by all of us, but we undertake this task with determination and urgency knowing that change cannot wait.”

Forliti contributed to this report from Minneapolis.

Find AP’s full coverage of the death of George Floyd at: https://apnews.com/hub/death-of-george-floyd.